'It's a good challenge and keeps me on my toes, there's a lot of variety.'

How long have you been at Guild?
I am the Acting Head of Operations & Strategy at Guild Trustee Services. I started at Guild in late 2018. Time flies when you are having fun!

What was the moment you knew you’d made the right decision to work at Guild?
There were a couple of small things. I already knew people at Guild but the initial conversation with the Talent Acquisition Manager was really refreshing. It felt more like a friendship, it wasn't forced. It wasn't too formal, she was just herself. I even had a small walk-through of the office before my interview which was great.

It was just all the little interactions before I started with the People and Culture team and my leader. On my first day - I think the day I just knew this is going to be an awesome place to be part of, because when I walked in and they had done an awesome job setting up my desk (including my nameplate) and it really was a nice first day. The induction was well set up and everyone around at GTS was so friendly and willing to share information. All in all, the culture at Guild is great!

What was the best day at work?
There has been a lot of really good highlights over the last couple of years. I think getting acknowledgement for my work has been lovely. All my colleagues at Guild are very respectful and are willing to work very collaboratively. There's a really forthright way of discussing solutions, so if people have something to say, they're willing to say it out loud. I think that's been one of the best things about coming to Guild.

In terms of work variety, there's always been a lot of different things for me to work on. What I'd be working on today is very different from tomorrow, and sometimes juggling the operations and strategy buckets and wearing different hats can be quite a diverse mix.

What highlights so far from your time at Guild?
Having the variety of work, the people and the interactions, which all have been so important.

Being able to represent Guild and winning an award at the World Pension Summit in the Hague, that was a career highlight, and receiving such positive feedback from all over the world about Guild and showcasing SUPERSUPER as a product was just a very cool experience.

What’s something that happened that could only have happened at Guild Group?
What I found coming to Guild is that I feel like with people in general as well as the leadership and not just Guild Super, the general outlook is people are willing to consider your input quite seriously.

There's absolutely no discrimination when it comes to age, gender or ethnicity. I feel like for the first time I felt I've been able to meaningfully contribute and be recognised for my work without any discriminatory boundaries which sometimes can become be very inhibiting.

I've worked in different places and I've pretty much spent most of my working life in Australia and moved here quite early on but I feel like Guild truly has given me a platform where I'm able to showcase my work and really just be able to fearlessly say what I believe. I've been respected for that and then my work has been valued. That's why I feel like the two years have flown by. It's been a great place to work at. It's been a really nice environment and a supportive bunch of people to work with.

What have you been proudest of so far in your work at Guild?
I think setting up the Project Office (PMO) at GTS from scratch, setting that sort of function up from scratch is always quite daunting. Not having a lot to start with, but just being able to roll out a framework, working in a digital model, building a good core competency of skills, sourcing people. I think that's definitely one of my proudest achievements in terms of growing the capability within the business and setting up Guild Super to do large-scale business transformation projects. Getting that core team up and running, I feel very proud of that.

On a personal level, I managed a very important piece of regulatory work called Member Outcomes for APRA. That was probably a personal highlight for me in terms of the work I was able to contribute to the fund and our members.

What experiences at Guild have you had that made you feel like you've expanded your horizons and knowledge?
In one of the strategic/regulatory reforms, APRA has driven was new to whole industry. One of the key defining moments was when instead of asking for external contributions first, I was able to take charge and lead it and say "Ok, this is my take on it. What are your thoughts?".

Liaising with the Risk, Audit and Compliance team, the Finance team and even just within Guild Trustees, that moment of thinking…yes, I understand this as much as I can and being able to believe in my understanding of it and being able to drive it. That was a very good moment for me to be on the front foot and lead. The outcome from this meant, we were able to shape our fund’s objectives well through this process.

When you tell people about your job, what’s the one thing that surprises them or gets them excited about the work that you do?
Some of the smartest people I've worked with have been at Guild. There are just lots of ideas-driven, vision-driven people. We're a small fund so it always kind of catches people by surprise.

Our transformation agenda for a small fund is great, which allows everyone to always have a variety of work. It does feel like a start up in some sense.

It's a good challenge and keeps me on my toes, there's a lot of variety. My job doesn't fit in a box so to speak.

Hobbies or Interests
I love traveling! Visiting different parts of the globe, exploring different cultures and sampling a variety of food.

Design in general really interests me and gives me a creative outlet. I really enjoy styling spaces and learning more about architecture in my spare time. 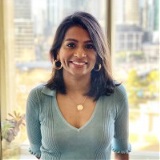