'The most important thing really is just the teamwork and great leadership.'

How long have you been with Guild?
I started with Guild around October 2019. I went through my training period and there was this period of quiet and contentment. Then, suddenly catastrophe after catastrophe happened. We went through the bushfire period and the height of that was December/ January. In February, we just got hit with storm after storm and had a few hail events which caused catastrophic damage across quite a few states.

We had to kick into gear and just get through it the best that we can. I think this is just what helped me gain so much experience in such a short amount of time because I went through all that pretty early on in my employment and now, I just feel like a pro.

What was the moment you knew you’d made the right decision to work at Guild?
I think I knew I made the right choice when everything that I pride myself on as an individual was really coming to life and being emphasised: my resilience, my wanting to be able to help other people in some small way. I mean we can't all be nurses, we can't all be firefighters or anything like that, but there are people out there and I'm one of them that I want to do my part in helping the community. In a small way I am getting so much reward out of that in the form of good outcomes. That's what's keeping me going through my employment and it's really what I was promised when I went through the interview process and in my induction process. I'm so, so happy to see it had that proven to be true.

I've worked in workplaces where there are so many empty promises and they just never delivered and it's really un-motivating. Coming into Guild I was wary of the promises but very, very quickly those promises all came to light, very early on.

Already, I partake in so many opportunities, I've become involved with different groups and communities within the organisation and that helps you stay connected to others. That's what made me feel like I've made the right choice in working at Guild.

What was the best day at work?
I don't think I could necessarily pinpoint a specific day when that happened, you know?

We go through the claims process wanting the best outcome for people so it's super rewarding when you can and finally hear from them and they say "I'm so happy with how this claim went and very happy with the service that was provided to me". That's just so satisfying to hear.

For me personally, that makes me very happy. Then when I'm finally closing off that claim and I can say I did all that I could for this one, onto the next one! You just go off that high especially after I hear a good response from an insured with the process, it keeps you motivated to keep going.

When you close off a very complicated claim or the insured would have been very stressed and worried, and you were able to successfully soothe them and comfort them, this is what keeps me going, it's what I strive for in every interaction and I think that is sprinkled throughout my weeks every single week.

What matters to you most about your work at Guild?
What's mattered at the most to me is ensuring that I'm doing all that I can do to create and maintain that above-and-beyond customer service expectation, and now it's to a point where it's not even an expectation anymore, it's just a given. I know a lot of people in my team feel the same way, that we're very passionate about what we do.

Having like-minded people striving for that same goal makes it so much easier and so I think to me, the most important thing really is just the teamwork, that great leadership and it's always showing that we're performing to the best of our abilities, which we do so that to me is what matters the most.

What experiences at Guild have you had that have given you the opportunity to create or work on something new or have expanded your horizons and knowledge?
This is my only experience of being in the insurance industry and going through those catastrophe seasons, to be honest, I wouldn't have it any other way. Through those experiences, it really goes to show that we have a purpose and trying to fulfill that purpose means so much to me personally, because that really aligns with my goals and expectations of myself, that I should be able to and to be able not only to grow and develop as an individual but also as an employee.

There are so many opportunities at Guild to expand. I found this out very quickly and that was again another thing I was promised and was happy to see that promise being delivered.

My role is a Claims Service Specialist, but that's not all that I do. I've become involved in so many other groups and communities. I've put my hand up to become a member of the Internal Communications Committee, which I was very excited about because I do have a degree in Communications. It's something that I would like to venture into one day when I'm ready, but to be able to showcase my skills and knowledge, be able to turn them into something within this community has meant so much to me.

We're working on some pretty exciting stuff as well and just taking all the data from our employees and trying to create an even better workplace - that's been a very exciting project to be part of. It's a group of just under 10 people from all businesses, so it's also been an opportunity to learn what others are doing, not only in Insurance, in Meridian, Acerta and GuildLink.

When I came into Guild, I just thought it was Insurance then I learned there are actually 7 businesses under the Group. Becoming a member of this group I've slowly been able to understand what these other businesses are, what they're doing and how they contributed to the community because it's all interconnected. That's been really exciting to learn.

When you tell people about your job, what’s the one thing that surprises them or gets them excited about the work that you do?
When I tell people my job title, as Claims Service Specialist, I think people just automatically assume that I just lodge claims and that's it. What really surprises them and is that we get really involved in the process, I spend all day on the phone, not just necessarily to our insureds, but taking calls from plumbers, suppliers, assessors. I'm constantly reading and reviewing reports sent to us about these claims and making decisions. I'm constantly looking at policies.

Another thing is, and I think this is something that Guild Insurance does extremely well is that we understand that, nothing is ever black and white. We do our best to look deeply into a policy to see if there is something we can do and we always give the benefit of the doubt, we’re very understanding.

People often say to me "Gee, that's really surprising because the insurance company that we're with, you have to give evidence first before you can even lodge a claim".

So, I think people are very generally surprised when I tell them we do all of this, that we work with suppliers and assessors, our clients, and internally as well. Then we also get quite involved in the policy aspect, trying to understand and constantly grow from that. When I tell people that I'm in the Claims team at an insurance company, they think I do very little but really, it's just so much more than that.

What is a hobby or passion you have outside of work?
I've picked up reading again. I'm loving reading classics.  I've also been baking a little bit. I'm a chocoholic. If I bake a batch of brownies, and I can sit there and eat them! In my team, if there's a meeting or Town Hall, I'm known to be always snacking on something. 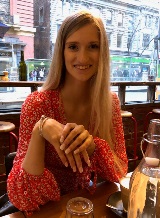